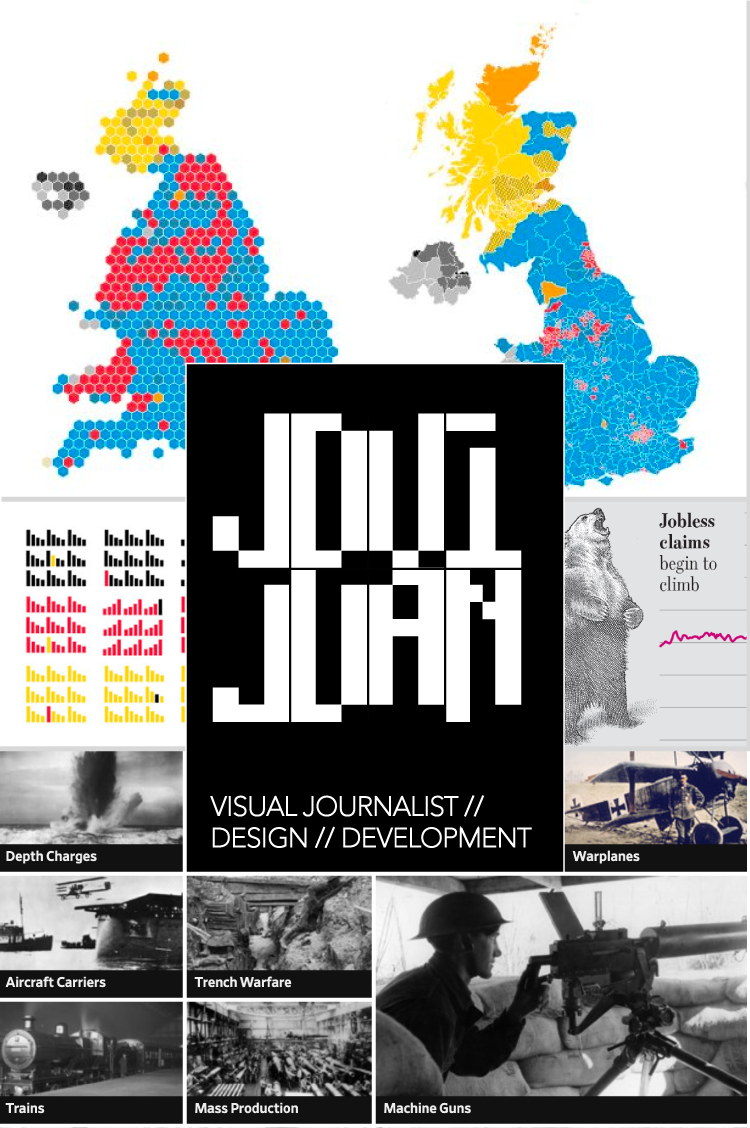 This site documents some of the projects I've worked on at The Wall Street Journal, where I led the interactive graphics team in New York from 2006-2013 and was the Graphics Director for Europe from 2013 on.

Intended to be a brief survey of recent work, below are a few internet things that surface my obsessions with the narrative form, data visualization, and user engagement.

In the early morning of the election, we gathered together the relevant takeaways from the election and summarized them in a set of data visualizations.

The inspiration for the piece was an earlier one we did on the German election.

At the Journal, we are of course, obsessed with the economic ramifications of Brexit, how it will affect trade, and the economy more broadly. Of the many we have created exploring the topic, these are my favorites.

Published a week before the referendum, we wanted to look at the specific effects of tariffs on the U.K. exports. The costs are quite high especially if the U.K. cannot work out a trade deal with Europe. Insightful at first glance as annotated scatterplots, we added a searchable database at the end that brought out some of the amusing elements of trade nomenclature.

The sequel to the previous piece, this time looking at imports, published as negotiations heated up, when a no-deal Brexit seemed imminent. This time, we moved the reader through the data, pointing out the interesting, consequential, and unintentionally absurd elements we found in our dives into it.

Between these two tariff pieces we published a series of Mekko charts that quantified the trade relationships the UK has by industry and country. The upshot is the U.K. runs significant trade deficits in almost every industry and with nearly every country. We would embed specific pieces of these into the many stories WSJ wrote on trade throughout the post-referendum period.

A beast of a project involving over 60 reporters and editors, this was one of the first big things we took on in Europe after I arrived. We designed an elegant, viral interface to hold over 100 articles on WW1, featuring photos, video, charts throughout the piece. We were honored that this was short-listed for a 2014 British Journalism Award.

Also from early in my tenure in Europe, this piece was done just before Europe experienced the deluge of migrants from the Middle East and Africa. Poignant and touching stories told through strong photography, this was a the kind of story that brought together the reporter and video and graphics teams as brothers-in-arms.

Through three migrant experiences captured as the human wave of migration was cresting, we wove together photography, video, maps, and charts to document what it was like for handful of people, some friends, some families, some couples to have walked, swum and ridden from the Middle East and Africa to Germany. Strange and affecting, this piece won an award of excellence at the 2015 Society of News Design awards.

Of the projects I worked on, this visualization and the reporting that went along with it, actually inspired a government investigation and, eventually, created a more restrictive regime around data releases in the U.K.

Sometimes you just need a good premise and a whisp of a structure, and a stream of data, and reader reactions will tell the story for you. Conceived as the market looked like it was ready to tank, this project assembled a set of live charts that high-value money managers use to predict a sustained market downturn. Readers were invited to predict a timeframe for the beginning of the next bear market, the results of which we charted on a weekly basis below.

Often cited in papers and studies, the vast knowledge contained in the bureaus about ISIS strength and activity in the Middle East and beyond was collected and refined into a series of videos and maps. Designed to work as it's own article promo, specific affiliates could be embedded in articles as sidebars, giving readers a quick understanding of the affiliate.

Occasionally, I've published a few stories in the Journal. Here are two that look back on with fondness.

John Hughes, “Sixteen Candles” and Me

I was lucky enough to lead a couple of teams that won Loeb Awards and unlucky enough to see the technology behind them slowly deteriorate through the painful attrition of code that anyone who has worked on this stuff long enough knows too well.

An important part of my career has been the work I've done as an artist and filmmaker. I recently put out a new project which combines these practices called solstice. Below are a few other links.